A graduate of Cornell Law School and Stanford University, Rich Roll is a 50-year old, vegan ultra-endurance athlete. In his thirties, Rich was climbing the corporate ladder. He realized after some time of doing so, he wasn’t happy or healthy. He was passionate about his career, but then realized how much he was suffering. What truly changed his lifestyle choices was when he was going up a flight of stairs and had to take a break halfway through. He was 250 lbs and had tightness in his chest and shortness of breath. He also recognized that he was depressed and had a problem with alcohol. He saw that something needed to change in his life and he changed it, big time!

Rich knew that going to the gym and trying to eat healthily wasn’t going to work for him. He said he needed a health change that would stick. To find the best way to eat healthy all the time, Rich tried numerous diets, and a plant-based diet was the one that worked best for his body.

When Rich started training for ultra-endurance races, he started training 25 hours per week. He referred to training as a second job. To achieve his goals, he had to cut out things like watching television at night. Having 4 kids, a job, and training 25 hours a week is possible. Rich proved that by cutting out some unnecessary, time-consuming things in his life. He later went on to doing Ultraman races, which is a double ironman distance triathlon. 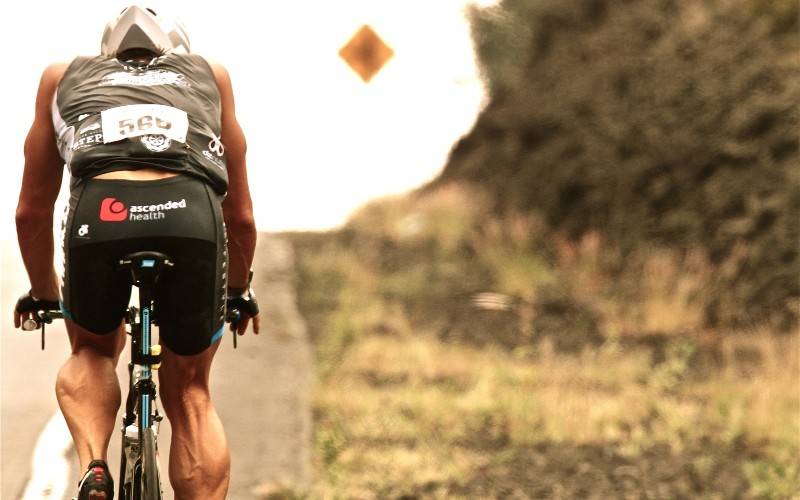 In the video below, Rich talks about how he started from rock bottom to becoming very successful. “I was a daily drinker, I was drinking vodka tonics in the shower in the morning and hiding drinks throughout the day,” Rich said. He also admitted that he was unemployable, sleeping in a dirty apartment with no furniture, and burning bridges with everyone he knew. Alcohol was something that got in his way before he started his health journey. “I realized I couldn’t live this way any longer. My elevator went to the bottom floor,” Rich said.

Right before his 40th birthday, he changed his life for the better. He went to a rehab center, took changing his life very seriously, and never looked back.

He explains in the interview that growing up, he was a competitive swimmer. Swimming was a sport he loved but also pushed his body and mind way past his comfort zone. “You know we are so conditioned to avoid pain,” Rich said. He explains that our society makes people believe that happiness can be purchased through comfort and luxury. He believes he is the happiest when he pushes past his pain threshold. On the other hand, you may be interested in learning more about muscle dysmorphia.

At the beginning of his lifestyle change, he decided to quit his job as an attorney and start a career as a life coach. By doing that he wrote a book and put himself out there, but he said people were not jumping at the opportunity to seek help from him. His family and himself struggled financially to the point where they couldn’t pay to get their garage taken away by the garbage truck. Thankfully after some time, his career took off, and now he can help people but also train for ultra-endurance races. The moral of Rich’s story is, anything is possible. If you want to read more inspirational stories then follow Men’s Group blogs today.