Jocko Willink: When Should Men Control Their Emotions?

Jocko Willink: When Should Men Control Their Emotions?

It’s always fascinating seeing hyper-masculine men talk about controlling and managing emotions. In this video, two very masculine guys get into the topic of emotions, when to express them and how to manage them.

Despite multiple jokes about repressing emotions the two seemed to have a fairly healthy view of masculinity and emotions. Their conclusions around how to think about how to control emotions and when to express them are not something you hear every day from a group of men that look like them or come from the military.

Jocko Willink is a retired United States Navy SEAL who is passionate about men’s groups and men’s issues. He received the Silver Star and Bronze Star for his service in the Iraq War and was commander of SEAL Team Three’s Task Unit Bruiser during the Battle of Ramadi.

In this video, he and Echo Charles – Jockos’ podcast and MMA training partner – discuss men’s emotions and the dynamics of impactful men’s support groups.

At first, some of the comments and jokes in the video sound harsh:

Yet Jocko and Echo both go on to encourage the expression of emotions as part of improving yourself as a man – releasing stuck emotions from big past events. The last thing they say you want to do is to isolate yourself from men’s groups and retreat into your emotions!

They suggest that expressing the small things is a waste of time and doesn’t benefit men’s growth in any way:

They go on to suggest that the solution is in managing your emotions by: 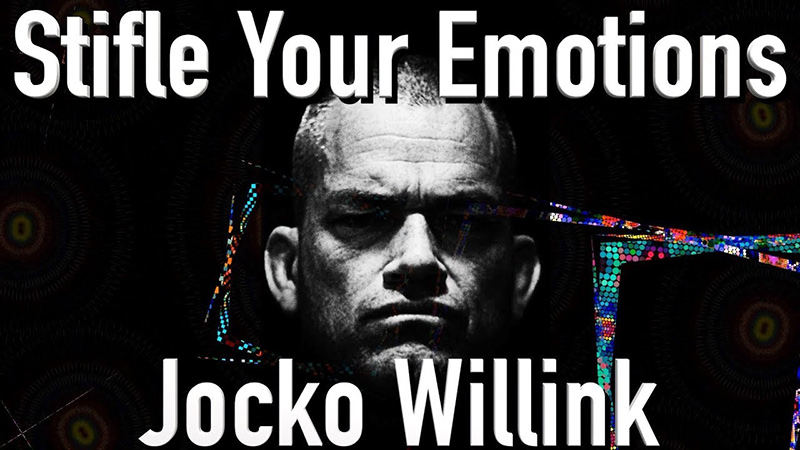 What we love about this video is how Jocko expresses that in all seriousness he has seen many good men torn apart inside from not expressing their feelings after significant life events – including childhood. He means ongoing depression, PTSD, anxiety, past abuses and so on. These ongoing emotional struggles and more serious men’s group topics will rip your life apart if they aren’t felt with.

They also explain that many people don’t feel safe opening up to their partner, their friends or their coworkers about these bigger, traumatic events they’re internally still feeling and how that can lead to anxiety, depression, unhealthy behaviors like drinking and even suicide.

How To Know When To Express Emotions

The one point they didn’t touch on is how you can figure out if you actually need to express an emotion. Many of us downplay our emotions and will say that it’s not a big deal when it reality it’s polluting our days and nights.

The answer is time. Being “hangry” will last an hour or a day at most. It’s nothing more than a mood that will pass.

Feeling unworthy because of family drama from when you were younger or experiencing PTSD after a traumatic experience will last for months, years and decades.

If some emotions are repeatedly showing up in your life and affecting your well-being and fulfillment, then it will be beneficial to seek the support of men’s circles around the matter.

Now you may have felt a knee-jerk reaction to any notion that implies reprising your emotions as a man, but this isn’t a new concept. Buddhists and many other teachers say to NOT let your anger out – keep it in and learn how to work with it.

In Conclusion: What Jocko Suggests With Emotions

To summarize, Jocko and Echo suggest:

The reality is that everyone has trauma. Everyone has things they’ve been through that they could benefit from letting go of. Everyone can benefit from talking through whatever it is that they’re facing. No matter how trivial it may feel to the man, the reality is that a lot of these common men’s issues can eat away at a man behind the scenes are really hinder a man’s personal growth.

So we highly recommend a professional counselor and/or men’s group to talk through those more significant things you might be feeling in your private life. And if you can’t find this in your own town, perhaps you’ll choose to go the route of learning how to start your own mens group.

Or you can just check out one of our online men’s groups to see if it’s a good fir for you.