Fear is an Illusion: Knocking Down your Fears with Frank Shamrock

Fear is an Illusion: Knocking Down your Fears with Frank Shamrock

“What would happen if you marched towards your fears with a plan of attack instead of retreat?” – Frank Shamrock

What comes to mind when you see the word: fear? Can you visualize something you’re afraid of?

What about how you feel? Do any particular emotions come up to the surface when you think of fear?

Take a moment. Close your eyes and think of fear. Really try to think of something you’re afraid of. Don’t try to analyze it, just sit with it.

Now open your eyes. When you thought of fear, what was your natural response?

As men, I think most of us would like to say we did the latter — that we pictured ourselves knocking down our fear when we visualized it.

But if we’re being honest with ourselves, I think we can agree that more often than not, we turn away from our fear. We avoid it. We pretend that it doesn’t exist, hoping it will go away. But when we do this, the fear remains. In fact, the more we resist our fear, the more it persists.

There’s a part of our brain called the amygdala that controls our fear response. It’s important that we have it — we’ve evolved so we can detect danger and respond accordingly, therefore increasing our chances of survival. Experiencing the emotion of fear is a normal human response. But too much fear can lead to stress, anxiety, and self-sabotage.

What is self-sabotage in relation to fear? It can look like a lot of things, such as:

It’s so much easier to just avoid the fear. To not even bother trying. We build up scenarios in our minds of all the potential things that could go wrong, and this prevents us from taking action in our lives.

Our fear takes over. It sits behind the wheel and decides which way we’re going, always choosing the safest route.

So, what does that mean? It means that FEAR is an ILLUSION.

This is not to say that experiencing the emotion of fear is an illusion, rather the mental walls we build up surrounding our fear are.

So, how do we knock down our fear? To answer this, let’s turn to someone named Frank Shamrock. 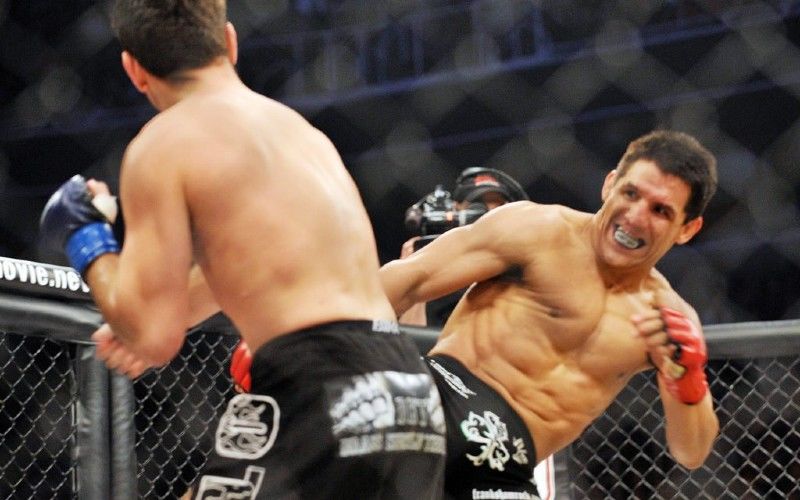 Who is Frank Shamrock? He’s a retired world champion martial artist and fighter. He was named “Fighter of the Decade” in the 90s, holds the world record for the fastest knockout, and was the #1 UFC fighter in the world during his reign. He’s now a motivational speaker and entrepreneur.

He’s someone who has been physically knocking down his opponents for years. He knows a thing or two about fear… and how to combat it.

Although Frank reached a very high level of success in his career as a professional fighter and is now a highly sought-after keynote speaker as well as an entrepreneur, the journey to his success was very difficult.

Frank had a traumatic and abusive upbringing. He served time in juvenile delinquency and prison for years. He became estranged from his child while incarcerated. He lost all hope and felt like he was going through hell for years.

That is until he met someone named Bob Shamrock. Bob Shamrock saw the potential in Frank. Bob took Frank under his wing and mentored him, believed in him, and encouraged him to pursue his dream of becoming a professional fighter.

Frank still experienced turmoil and difficulty, but with a purpose and a goal of becoming a martial artist and with the support and care of someone who believed in him, he was able to live up to his potential; to face his fears head-on and charge ahead.

Frank has fear just like the rest of us. But he doesn’t let the things that scare him stop him.

He knocks down his fears by marching toward them, just like how he would face his opponent head-on in the fighting ring. He doesn’t try to hide from his fears, because he knows that if he does, they’ll be even more difficult to knock down later.

He has a method for facing his fears, which looks like this:

Next time you feel fear, take a moment and think of this method. Go through each step and write it down or say it out loud. Most importantly, don’t let fear prevent you from moving forward. Do it anyway.

In order to prevent emotional baggage to overwhelm you, you might want to read this article: “Unpacking Your Emotional Suitcase With Jack Antonoff.”

Remember those confining walls you build up in your mind surrounding your fear? The walls that make it so much more difficult to break through your fear later?

When you start to build up your mental walls, keep in mind this advice that Frank gave during his TEDx Talk on addressing Fear as an Illusion and how you can knock them down:

“Fear is like a brick wall. Every time you turn away from that fear, you place another brick on that wall. Every time you say ‘no, I can’t do that. That’s too much.’ Every time you turn away, the wall begins to strengthen – the wall gets stronger. But this wall is all in your mind. If you don’t place this brick, the wall doesn’t exist. Every time you take a step forward, the wall crumbles. The only power in the wall is you placing the bricks, you doing the fears. Find somebody to share your fears with. Find yourself a life passion that you believe more than anything else. And if it’s not there, start talking to people, because it’ll come out. When you find that passion and that purpose, then you can go on your mission and share with all honesty.”

On the other hand, you might want to read our article “Wheel of Emotions“.

For Frank, his passion was martial arts. He used the physical outlet of fighting, of training, of engaging in a competitive sport, and of always trying to get better at it to combat his fears. His passion now lies in motivational speaking, entrepreneurship, and repairing his estranged relationship with his child, and becoming a better father to both of his children now.

He turns to the support of those around him and to those who believe in him as motivation to keep moving forward. He talks about his fears and his discomfort with others and this makes him stronger, both physically and mentally.

Frank now shares his life story, his traumatic past, and his journey to becoming a world champion fighter to inspire others.

Who will you talk to about your fears?

How will you channel your energy?

There’s power in having a strong sense of community and receiving support from others. Having a space to talk about your fears is the first step to overcoming them. Join a Men’s Group today to talk with other guys, just like you, who are also going through challenges, difficulties, and experiencing fear.

Think about what you feel passionate about and how you’ll channel your energy. How will you do the thing that scares you?

Remember, when you face your fears head-on and talk about them, it’s like taking a layer off the brick wall. Let’s knock down these walls together.