NBA superstar Shaquille O’Neal shows that real men do cry, sharing that he took his loved ones for granted and is now struggling with the grieving process.

It was with deep sadness and tears streaming down his face, that Shaq shared how he felt about the death of his friend and former LA Laker (basketball) teammate, Kobe Bryant. The world grieved the loss of Kobe but Shaq felt his grief more than most.

In this touching video, Shaquille shares his sadness, how he’s been struggling with the loss of a few friends, his sister and now Kobe. He also touches on how he wishes that he reached out to loved ones more. That he took them for granted and wishes that he could talk to them one last time.

We wanted to share this clip with you because:

Shaquille O’Neal is a former NBA basketball star who played for the Orlando Magic and then the LA Lakers. He is best known for his towering stature: 7 feet 1 inches and 325lbs.

Kobe Bryant was a teammate of Shaq’s for the Los Angeles Lakers. He also became a superstar with his incredible ability to score and charismatic personality.

Shaq and Bryant were together on the same LA team for 8 years, winning three back-to-back championships. And while they were close teammates and Shaq was a basketball mentor for Kobe, the two had a complicated male friendship. The two often clashed in the locker room and took every opportunity to raz each other.

The shock of grieving a loved one

In the above video, Shaq admits to not believing the news at first, suggesting that he was in grieving denial. He then broke down and said he felt the sharpest sadness and pain he’s ever felt in his life.

There’s no words to express the pain Im going through with this tragedy of loosing my neice Gigi & my brother @kobebryant I love u and u will be missed. My condolences goes out to the Bryant family and the families of the other passengers on board. IM SICK RIGHT NOW pic.twitter.com/pigHywq3c1

Kobe was so much more than an athlete, he was a family man. That was what we had most in common. I would hug his children like they were my own and he would embrace my kids like they were his. His baby girl Gigi was born on the same day as my youngest daughter Me’Arah. pic.twitter.com/BHBPN5Wq8V

Shaq said that everyone was saying that he looked like he needed rest. He has been sleeping since the death of his sister. Since the death of Kobe he hasn’t been eating or sleeping well. O’Neal said “I’m not doing well. I’m sick.” The 7’1″ giant went on to say that he hasn’t felt pain or sadness this strong in a long time. He said that he’s been shaking a lot and numb.

Shaq has received advice that he should take his time and get better. He says that will be hard for him to do.

Men can get too caught up in work and life

Shaq said that he works more than most people and doesn’t reach out to his loved ones enough. He says that he regrets not calling his loved ones more often and mentioned that he hadn’t spoke to Kobe Bryant in over 3 years. He said, “I just get busy and forget what’s important”.

That is something that we can all relate to as men. We’re hardwired to go deep on a purpose like work. It can consume us and can pull us men away from what’s really important in life: self-care, love, and relationships. Even Jocko Willink shares that men don’t communicate their emotions enough.

He says of Kobe, “I wish we would have communicated more”.

We can take our loved ones for granted

As O’Neal points out, when someone dies they are gone for good. He regrets not having talked to Kobe more and this is a common saying from people who are grieving: I wish I invested more energy into my relationships. I wish I could have told them I truly felt about them before they died.

O’Neal says, “We should never take a person for granted” 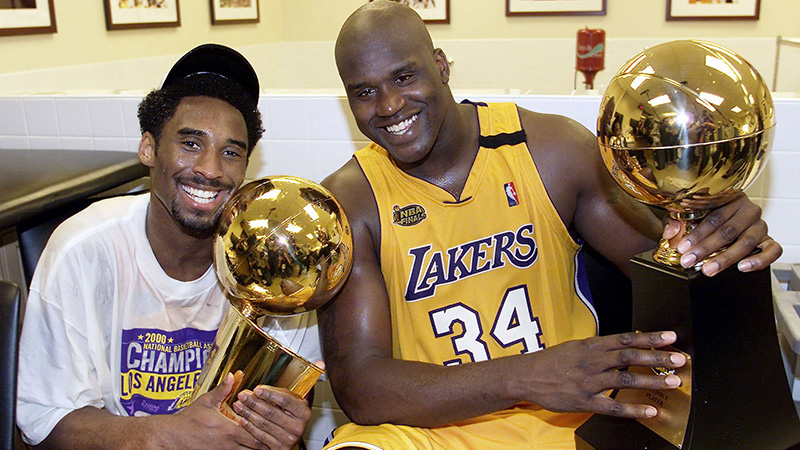 Everyone struggles with grieving a loved one

Shaq mentioned he had been struggling significantly with the loss of his sister to cancer. He mentioned that 9 months later he is still struggling to accept the loss and mourn her dying, saying that he still doesn’t believe it happened.

O’Neal mentioned that all his basketball idols are old and still alive. He can’t believe that Kobe died so young. He was the greatest laker and one of the best basketball players in the world. I just can’t accept he’s gone so young.

This is a classic example of psychological denial when grieving a loved one. This a common experience for all people who have lost someone but especially a sudden, tragic loss of someone young like Kobe.

Shaq said that everyone he’s talked to is hurting, even the lakers organization. A lot of people he’s talked to have been receiving therapy or counseling. Everyone is struggling to come to terms with the loss.

The positives of tragedy and grieving

While it may feel like there is nothing positive about the loss of a loved one, there are lots of positives that happen as a byproduct. You aren’t expected to feel positive while you’re grieving, but just know that it’s not all dark bad news.

For example, Shaq said that he learned his lesson. That he will reach out to others more and communicate more. Already he said that he spoke to many old friends, distant family members and people from the Lakers organization that he hasn’t spoken to in year or decades.

This is a common experience for people mourning a loved one. Death, tragedy or any loss puts things into perspective and reveals fundamental truths about life that were overlooked, like taking our loved ones for granted. Loss also often brings other people together in ways that were unexpected.

Shaq touched on a very important point in this grieving video; that he doesn’t reach out to the guys enough. He admits that he has been struggling with his recent losses and the grieving process. And this is something that most men can relate to as well. We don’t reach out to our buddies or people close to us and share our experiences or how we feel about things. We fear that doing so makes us look weak.

So take the time. Reach out to loved ones. Tell them how you feel about them and what you appreciate about them. And share what you’re going through with others. It will make the grieving process easier.

And if you don’t have someone to talk to, as Shaq mentioned above you can go and speak with a counselor or therapist. You can also sit in on a free men’s group like ours and to see if it’s the right fit for you. Other NBA superstars like Steph Curry and former US President Barak Obama suggest a men’s group, especially when grieving the loss of a loved one.